Adventure programming guru Karl Rohnke died in October 2020. This is my tribute to Karl as my most influential mentor, colleague & friend.

The Sun to My Flower

Karl Rohnke was my long-time mentor, colleague, and friend. He was the sun to my flower. No doubt, he was responsible for the propagation of many a garden throughout the adventure programming world.

Millions of teachers, experiential educators, trainers and coaches have been touched in some way – directly or indirectly – by his games, his many books, his training workshops and unique sense of humour & adventure, not to mention, his original innovation with Project Adventure.

Other than for the work of Outward Bound (and Karl worked with OB for a while,) there are few people or organisations in this world that work in the adventure-based/experiential industry that do not trace their roots back to PA, and therefore, Karl.

We met in 1988 when he visited Australia for one of his many Project Adventure workshop tours down-under. As one of his workshop participants, I was mesmerised by his infectious enthusiasm and sense of fun and adventure. He ignited a spark in me. I wanted to be him.

After a rigorous six month internship alongside Karl and many other awesome trainers at Project Adventure, I returned home in 1990 to establish the business of PA in Australia. I was bringing the adventure home.

Thirty-plus years later, the signs and markers of his influence on my life and career as an experiential trainer are abundant, transparent and enduring.

First and foremost, my passion for taking fun seriously. Karl was nothing if not fun. Indeed, he coined the term FUNN – Functional Understanding Not Necessary – to capture how successfully fun greases the wheels of engagement and interaction. Watching Karl weave this magic into his programs inspired me to make fun and play my most powerful tool, too, to influence the way my groups felt and create an environment that encouraged them to step outside of their Comfort Zones.

Interestingly, as much as I love and have loved Project Adventure’s innovative approach to education, I always felt that this element was never fully leveraged as its business model outgrew Karl. It seemed that in any list of benefits to describe why adventure education was important, fun was often neglected or relegated to the bottom of the list.

To Karl, fun was always front and centre and, quite frankly, just made sense. So much so, it was the focus of my book Serious Fun in which I sought to explain how I do what I do. If I’m being honest, it was really my attempt to describe what I saw in Karl – and now mirrored in me – so that I could help others unlock this magic, too.

Tipping My Hat to Karl 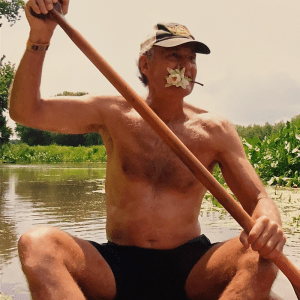 Next on the list of influences was his humour.

Karl was a master at generating laughter to create a positive learning environment. It was never disparaging and often observational in nature. You know, moments like spotting a sneaky backwards glance from a nervous participant to check that their spotter was in place, or an irreverent smile to acknowledge an awkward, hopefully-overlooked interaction within the group, and so on.

In the beginning, I’m sure I copied many of Karl’s witticisms before proudly developing my own bag of tricks. I hear myself say things like “This next game sits somewhere in my top 87 activities…” and it’s hard not to smile. Maybe I picked this up from Karl, who knows? But there is no doubt my brand of humour developed on the back of Karl’s.

An Author to Inspire

Karl authored many books which I treasure, but what I loved most was his very personal, narrative writing style in which he would weave in one or three high-brow words that would cause you to reach for a dictionary. As the proud author of (only) five books – not to mention, a massive online activity database with descriptions of 500+ activities – I channel a little bit of Karl every time I write.

My penchant to write was undoubtedly inspired by his example because it was the best way for me (at the time) to share a love of adventure programming beyond those who turned up for a training workshop.

As part of an intern’s job description, I helped Karl stuff 800+ envelopes every three months to distribute his Bag of Tricks newsletter. This was his way of sharing the latest and greatest activity ideas with his tribe. Today, leveraging the power of digital technologies, I often muse that the online activity database I developed as part of playmeo.com would be the 21st Century equivalent of his newsletter and books today.

I am grateful every day for the privilege to share my love of interactive group games & activities with people all over the world. I ‘tips me hat’ to Karl with every activity I share.

Starting with an Unofficial Start

And with every program, I invoke a little bit of Karl when I present (what I call) the unofficial start – that something fun I do to break the ice as people begin to gather for the start of a program and desperately want to be distracted from being bored. The first time I witnessed this strategy, Karl threw out a bag of short ropes and invited people to grab one and teach another person (possibly a stranger) how to tie any knot that they knew. Over my career, this ‘unofficial start’ technique has morphed into dozens of activities to become one of my most-loved programmatic tools.

Finally, I honour Karl’s legacy every time I play certain games such as Farkel, Peek-a-Who, PDQ Test, Space Counting, Hospital Tag and so many more, because their delivery provokes such strong memories of a time these activities were connected to him. Such fun.

Earlier I mused that I wanted to be Karl. I probably emulated my hero for about five years before, eventually, becoming me. From a pesky intern who was Karl’s shadow, I grew to become one of his many respected and esteemed colleagues. An equal, if I may be so bold.

I will conclude by sharing the sentiments echoed by many thousands of other practitioners who were clearly touched and influenced by Karl’s example, too.

I have the privilege of moderating an active Facebook Group for people who use interactive group games & activities in their work and play, something I’m sure Karl would have loved to have been a part of. A sort of Bag of Tricks on steroids, you could say.

Below is a glimpse of the gratitude these folks expressed, painting a picture of his influence on them when they learned of his passing:

I continue to teach with his stories and celebrate his influence. Karl is with me every day, perhaps my shadow, because after all, how do I mourn someone who I believed to be immortal?

I will close with the acknowledgement I expressed to Karl in 2014 in my book Serious Fun:

“I express my deepest gratitude to Karl – for throwing a stone into the pond of adventure programming so many years ago. You could never have known how far that initial ripple would travel. I have thoroughly enjoyed surfing it.”